ENERGY PRODUCTION
“We produce when we use and store for the snore!!”

Shaping of the concept

The goal for the energy- system is to have a net-zero-energy building meaning that the total amount of energy used by the building is equal to the amount of renewable energy created. We want to reduce the need of storage as storage generates a high heat-loss, so we need to produce as much energy as we can during the occupant’s peak demand. For a normal residential building, the greatest energy and heat demand is in the morning and afternoon, why Auroras roof has been shaped to optimize the energy production in the morning and afternoon. On the two pictures below the conceptual idea is visualized. According to tests made in Polyson we can become 7% more self-sufficient on an annual basis with the presented shape compared to a flat roof as the energy production align with the electricity consumption. 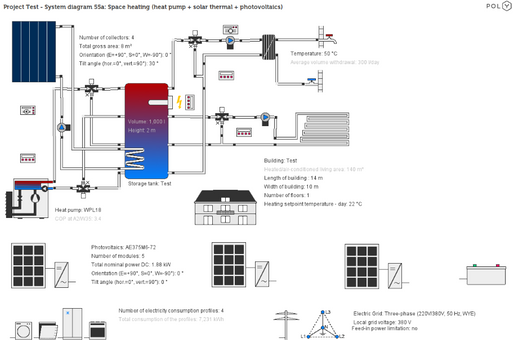 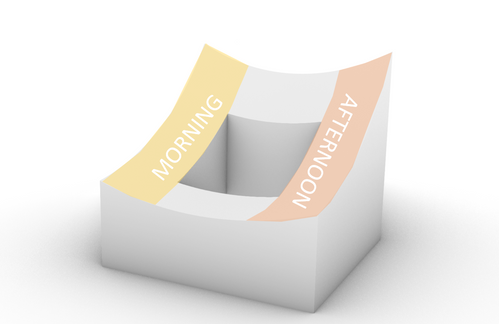 Aurora will create the necessary energy from solar energy by using photo-voltaic (PV) panels and air to water heat pump combined with solar collectors, as shown in the figure. The PV-panels use the sunlight as a source to generate electricity to the building and its equipment as well as supporting the heat pump and the air handling unit with electricity. The heat pump is combined with solar thermal system as a supplement to the heat source in the building. The heat pump incl. solar collectors will provide the building with space heating heat the domestic hot water. To get a more efficient system, excessive energy will be stored in a thermal energy storage tank. The building will also be supplemented with batteries that charges with the excess of electricity during the day and supply electricity to the household during the night.

For the energy design system with a mix of PV and PC panels the building will produce 8500kWh electricity annually and 6000kWh heat making Aurora 75% self-sufficient during a whole year but by dimensioning Aurora probably we have reduces over-production and reach a self-consumption factor of 85%. This means that only 15% is sold to the grid. As the Solar Decathlon contest is held in September the design has focused on making the building as self-sufficient as possible in that period. Aurora will reach a self-sufficiency of 99% in thermal and 93% in electricity with this system based on simulations in Polysun. Aurora’s energy system has been optimized for an economic and sustainable point of view as an over-production would lead to waste of material, in this case solar panels.